We Choose Tolerance – We Have More in Common. IOM Launches Diversity Campaign in Georgia

Launched by the International Organization for Migration (IOM) in Georgia, the "We Choose Tolerance - We Have More in Common" diversity campaign aims to promote migrants’ rights and diversity in the country. Awareness on topics such as the benefits of migration and the role of migrants in Georgia were raised whilst putting importance on countering xenophobia were encouraged.

“We are all witnessing the fact that, often migration relates to crisis and incidents but the positive aspects and benefits, which  are brought about by migrants to Georgian society remain uncaptured or taken for granted. This campaign takes a fresh look at and focuses on positive aspects of migration.’ Says IOM Georgia’s Chief of Mission Sanja Celebic Lukovac.

“The Office of Public Defender of Georgia is happy to cooperate with IOM under this campaign. Such initiatives matter – they do have positive impact on social attitudes and behaviour. Usually, discrimination is a result of prejudices, subjective circumstances, and abstract fears. Therefore, though it takes time, engagement of people in such activities does bring positive results in the end.” Says Shubashvili.

Under the campaign, IOM also brings to the public the stories of Belgian, Irish, Indian, Japanese, Nigerian, and Iranian migrants, who have been living in Georgia for multiple years in hopes to smash stereotypes by showing the value of diversity and the role of migrants in country’s development.

Watch the video and listen to what Joseph, Kanji, Maitry, Timothy, and others have to say.

Under the campaign IOM has developed a simple and fun quiz (in Georgian), which consists of only 7 questions. Though the test is not based on scientific research, it will help evaluate one's attitudes and actions in relation to diversity and tolerance. Diversity is crucial for social development and progress.

“To those migrants, who are facing challenges on their route to integration, I would advise to try and learn Georgian language, understand the culture and perhaps you will then understand (possibly) rational fear of many Georgians that diversity is a threat to national identity and culture. On the other hand, I would like to remind Georgian people that many Georgians are emigrants so do to others what you would have them do to you” said Mariam Sanogo, one of the faces of the campaign.”

The campaign was implemented with the support of the Foreign Affairs Ministry of Norway, in cooperation with the Public Defender's Office of Georgia. To further promote the campaign, IOM has placed posters around the cities of Tbilisi, Rustavi, Kutaisi, and Batumi, which host most migrant communities. More activities are planned with the support of the Ministry of Foreign Affairs of Norway, aimed at promoting of diversity and migrants’ rights in Georgia. 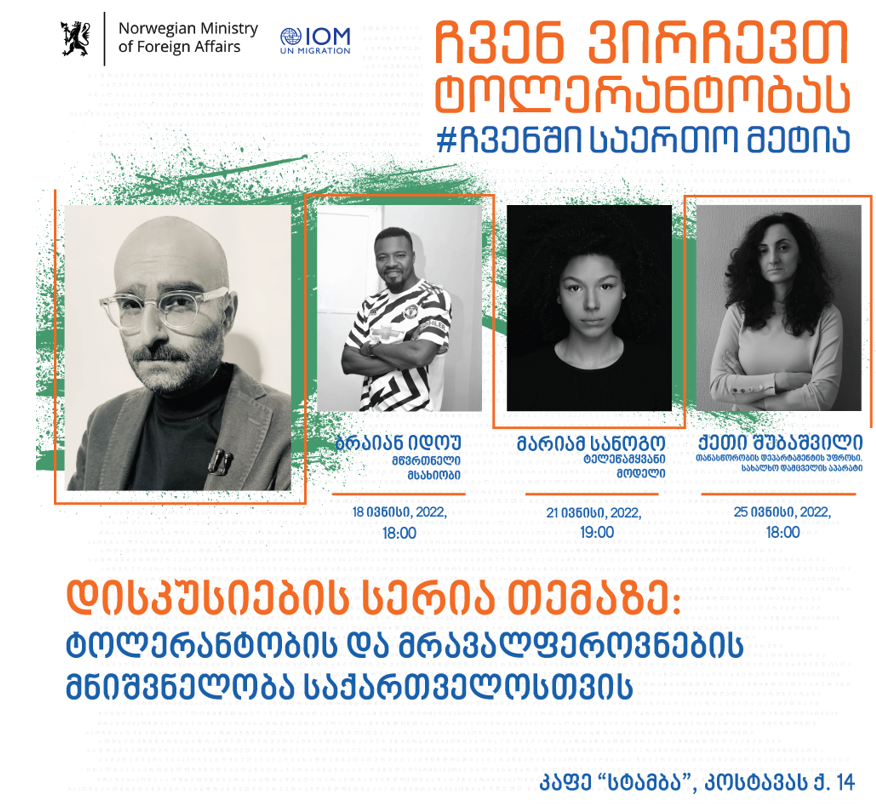